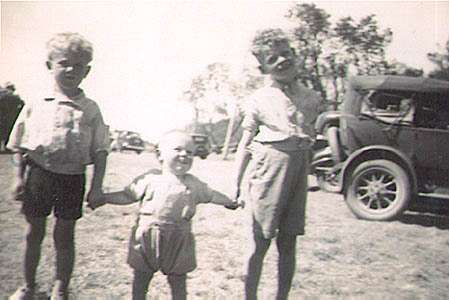 Frank’s father, Leslie Closter, was a market gardener in Burwood in 1938 when he was offered a job by a Mr Bovill in Scoresby. The job was to milk his herd of cows, in exchange for which accommodation and firewood were provided plus a wage of three pounds and five shillings a week.

Times were hard and Frank’s parents found it very difficult raising a large family (Frank had two brothers: John and Mick and three sisters: Isobel, Irene and Mary) so when he was seven he was ‘farmed out’ to George and Lily Gilbert who had a farm on the south side of Ferntree Gully Road. The Gilberts were very good to Frank but for one so young he had to work long and hard. He was attending Scoresby State School but was out of bed before sunrise each morning to hand pump the water up from the well to a header tank. From there the water trickled down inside a corrugated metal ‘wall’. The fresh, warm milk was emptied into another tank on top of this arrangement and ran down slowly on the outside of the corrugations and was thus cooled by the time it flowed into the milk can placed below it. This system was known as ‘brine’ cooling. Frank also helped with the hand milking – after as well as before school – and for this he received one shilling a day. He was also paid an extra shilling for helping in the making of haystack covers. His job was to cut down the sides of bran and pollard bags to create a long piece of rectangular material. He then sewed these pieces together to make a kind of tarpaulin. 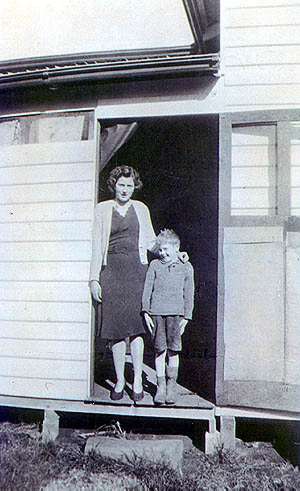 Frank with Verna Gilbert. Frank came down with scarlet fever in 1942 but fortunately recovered after several weeks in hospital. However, he was shocked to learn that Verna had died of the disease

Frank enjoyed the times when the old haystack was cleared to make way for the new one. He’d help to pull up the boards used as a base while the Gilbert’s fox terrier dashed around grabbing the rats as they scurried out of their holes. Frank remembered that Mrs Gilbert was equally as lethal with her straw broom and between her and the foxie few rats managed to escape.

Frank learned how to ‘sweep’ the hay and helped in the building of the stacks. There were haystacks put up on all of the farms throughout Scoresby and Rowville and George Gilbert was recognised as one of the best haystack builders in the district.

When Frank was about eight there was an outbreak of scarlet fever in the district and people milking the dairy herds were required to wear muslin masks as it was feared that the disease could be spread through the milk. Frank recalled becoming ill and being bathed by Verna, the Gilbert’s 16 year old daughter. He was taken to Dr Taft who diagnosed his illness as scarlet fever and his father asked a neighbour, Mr Towner, to drive them to Fairfield Hospital. The car broke down and Mr Towner went back to get his truck that was partly powered by a gas producer (made necessary by war-time petrol rationing). Eventually, late at night, Frank’s father carried him into the hospital. Frank was given a phenol bath and his clothes taken away to be burned. He was to spend the next six weeks in bed there, living almost entirely on junket, so inflamed was his throat. When he returned home he was saddened to learn that Verna had also come down with the disease and tragically had died. He was told, too, that families throughout the district had burned sulphur in their homes as a safeguard against the infection. Fortunately Frank made a complete recovery.

Apart from the Towner vehicles, there were only three other motors in the district: Ehrenfried Exner owned a 1927 Capitol Chevrolet truck (later bought by Frank’s father), Tony Zarro had an old Buick car and Claude Patterson a Chevrolet truck. Claude was a character who liked a drink; he was also a good singer and played the mouth organ. One day he went missing and everyone turned out to look for him. He was known to walk across the paddocks to the Mountain View Hotel so the search was concentrated in that area and before long the sound of his singing was heard by the search party. When they tracked him down they found him halfway up a gum tree where he’d taken refuge from a bull.

Frank learned how to use ferrets and how to make ferret nets and so started out on a good way of making pocket money. He sent the rabbit skins to McKinnon’s in Richmond for sixpence each and put the carcases on the Grenda’s bus for delivery to Westaways, the Dandenong butchers. He received one shilling and three pence for each carcase. When the Corhanwarrabul Creek flooded (which it did regularly), the whole area between the Creek and Ferntree Gully Road and beyond was under water. Rabbits were driven out of their burrows and took refuge on any small portions of raised ground. They were easy picking for Frank and his mates who waded out across the paddocks and dispatched dozens of them in a day.

Moonlit nights were the best times to catch the eels when they were ‘running’ and Frank remembered his best catch as being more than 100. However he ‘caught’ some trouble from his father after one expedition when he lost the family’s new hurricane lantern in the creek. Eels were terribly hard to skin and you had to nail the head of the eel to a post and then skin it with a pair of pliers.

One of the tasks that Frank did for his mother was to take the overdraft payment money to the bank. She would pin the banknotes to the inside of his shirt and he then travelled to the ES&A Bank in Box Hill in an old ute driven by Mr Bovill.

The Scoresby Store on the north-west corner of Stud and Ferntree Gully Roads was run by ‘Speedy’ Dobson (so called because of his slow service). It was a treat to go there to buy sixpence worth of broken biscuits. Mr Piergrosse brought the mail over to Dobson’s store from Bayswater then the Bergins and later Mrs Manley would come up to collect it for the Rowville area.

After finishing at Scoresby State School Frank went on to St Joseph’s at Ferntree Gully and it was a long walk there each day. He was lucky one day, however, to be given a lift and from then on the same driver picked him up regularly. The man was a test driver for the newly produced Holden cars and each day he drove a brand new one through the Dandenongs to put it through its paces on the hills and winding roads.

The Scoresby Hall was a focal point for entertainment in those days although occasionally Frank went to the picture theatre in Ferntree Gully. It is now the 1812 Theatre.

Les Closter was the MC at the dances at Scoresby and called the dances such as the Alberts. The older people played a card game called euchre in the back room. One of the regular bands was Pearsons and Frank remembered Norm Fear from Mulgrave playing the drums as did Westy Wright, the Ferntree Gully blacksmith. Old Bill Foster was the doorman. He would arrive in his jinker and hitch his horse to a rail outside the hall and put a couple of bags across its back to keep it warm. Frank recalled that one night some of the boys took the horse out of the shafts and tied it up to the other side of the hitching rail.

Frank and his mates would sometimes drive to dances in Dandenong. If Stud Road was flooded at Dandenong Creek they would stop and put a bag over the car’s radiator and then drive slowly through the water. Ferntree Gully Road flooded too and Frank often helped pull out stranded cars with his father’s tractor.

As Frank grew up he played football for Scoresby. A number of Rowville men were involved in the Club. Ehrenfried Exner was the President and Reg and Leo Gill were trainers. Stewart Finn, Peter Stokie and Bob Arnott were good players from Rowville. In the very early days before the Scoresby ground was constructed, the team trained on Mr Exner’s property about where the Stud Park Shopping Centre now stands.

Jim Hill lived next door to Mr Exner in a small house with no front windows. Jim was a good mechanic and played the saxophone.

In the very early days the Tampe family lived south of the Creek by Stud Road and George Leeworthy, an ex-policeman, started a saw mill next to them. When he married Minnie Zarro he built a new brick house which is now used as the Rowville Veterinary Clinic. Phil Faella and his wife lived in the old house vacated by George and sadly it burned down with all of their possessions.

Around the corner in Kelletts Road there were the Hills and A.F. and G. Robinson whose farm ran down to the Creek where Laser Drive is now. They were great vegetable growers.

Marriots were next to them and further down again was Marty Alberni. Vern Sullivan owned a cheese factory in Kelletts Road opposite the Alberni’s and at one time Frank worked there for Vern.

Further along Kelletts Road were Hayes, Dalkeith and Pendlebury. Les Closter bought a 15 acre property called “The Lawns” in Major Crescent and market gardened there for a time. Freddie Williams lived next door and any time that Frank’s mother cooked a roast dinner, a plate was passed through the fence to Freddie.

Les also had land in George Street, Scoresby (about opposite St Jude’s) and it was there that he became the first person to grow some seed given to him by an Italian neighbour. As always, Les prepared the ground with a single furrow plough; the plants grew well and he was able to take the first crop of broccoli to the Victorian Market. If he had a heavy load on the truck he would leave for town the day before, staying the night at his sister’s in Carlton.

Les, like many people in those days, hated having an overdraft and when he was offered 5,000 pounds for his 15 acres in George Street he accepted it, despite Frank’s advice not to sell. The new owner put in an orchard but even before the trees came into production he sold the land to a developer for $650,000.